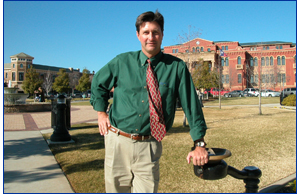 Prizm Development, Inc., was founded in 1995 by Bob Reznik, who holds an MBA specialized in healthcare and quality management systems. Reznik has authored four books on healthcare subjects and is a nationally recognized expert and speaker on center of excellence development. He was chosen by the American Association of Neurological Surgeons (AANS), World Research Group, Spinal Intervention Society, Becker’s ASC Conferences, and many other groups, as a speaker on center of excellence development.

Prizm has been in business for over 26 years, longer than any other spine development company or consultancy. Prizm’s innovative multidisciplinary spine team concept for spine care — that combines the core disciplines of spine surgeons working closely with physical medicine & rehabilitation and spine therapists — was developed in the 1996 based on more than 500 one-on-one interviews with national health insurance companies and large employers that desired a center of excellence approach for spine care rather than fragmented silos of care based on physician training silo.  Reznik’s multidisciplinary spine team model has been widely copied by other consulting companies and spine groups over the past 20 years. Reznik and Prizm has been cited as a trend leader in the textbook, Redefining Healthcare, which examines those entities that are leading the evolution of healthcare in the United States.

Over the past 26 years, Prizm has worked in 48 of the 50 states, developing destination centers for spine from Alaska to Maine, and California to Florida. These spine centers were successful in major markets like Newark, Dallas and Los Angeles as well as secondary markets like Augusta, Champaign, Reno and Savannah. Prizm spine centers in 1997 were also the first in the nation to publish clinical outcome report cards for spine that showed payors the percent of patients receiving spine surgery, injections and therapy; patient satisfaction across seven metrics; use of drugs at intake and post treatment; and return to function across three metrics.

On the health side, over the last 20 years, Reznik has completed 4 marathons (26.2 miles), and more than 20 half marathons (13.1 miles). With his sons, he also completed a Marine Corp Mudrun (6.2 miles through mud and obstacles with boots and fatigues). He received a golf scholarship through college, and continues to play golf as well as tennis competitively. 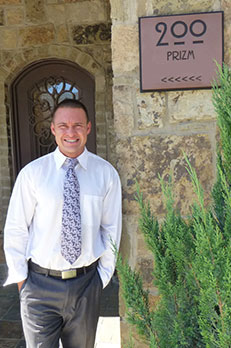 John Reznik has been at Prizm Development since 2007 and currently acts as Chief Technology Officer.

John has a Masters in Business Administration Degree (MBA) specialized in healthcare from University of North Texas which is one of the few universities in Texas offering MBAs specialized in the healthcare niche. Before completing his MBA, he completed a Degree in Business Administration from Oklahoma State University, Stillwater, Oklahoma where he was named to the President’s Honor Roll for several semesters for a 4.0 average, and graduated with honors.

On the personal side, John is a proficient snowboarder, hunts, golfs and enjoys working out in the gym constantly. In 2010, John completed a Marine Corp Mudrun (6.2 miles through mud and obstacles with boots and fatigues). In 2014, he competed in a body building competition and garnered 3rd place in his division.

In addition to his work with Prizm Development, Inc., John is part owner and serves on the board of directors of MedIngenuity, LLC, a company involved with medical practice development for a variety of healthcare companies, medical practices and ambulatory surgery centers outside the niche of spine, orthopedics and neuro. 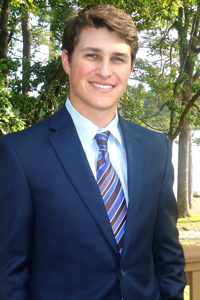 At Prizm, Andrew is involved with all Prizm’s healthcare development projects, including Internet site strategy and site architecture; Prizm’s referral development systems; and Social Media Marketing that helps Prizm clients maximize their visibility from social media vehicles like Facebook, LinkedIn, Twitter and Google search. He manages Prizm’s proprietary intellectual property systems that enable client Internet sites to score in the top 10 on Google and other search engines. He manages many of Prizm’s clients and their development activities. He has helped numerous clients grow rapidly and manages many of Prizm’s Ambulatory Surgery Center and large orthopedic group clients. For orthopedic groups, he helps them organize into subspecialty centers that address sports medicine and joint replacement which increases their ability to attract patients from a 150-mile radius.

Andrew Reznik has an MBA degree (Masters in Business Administration) from the University of North Texas. He was also a Magna Cum Laude graduate of University of Texas at Tyler with BA in Business Adminstration with a marketing emphasis. Andrew had a partial scholarship at University of Texas at Tyler, where he played on the tennis team for three years. In his sophomore year, Andrew was ranked #7 in the nation in DIII men’s doubles and earned “NCAA All American” status. His college tennis team became NCAA Conference Champions in 2009, 2010 and 2011. Before playing college tennis, Andrew was ranked as a “SuperChamp” in tennis throughout his teen years, as well as being named the captain of the Southlake Tennis Team, a 5A powerhouse Texas tennis team, where he played for four consecutive years.

While at University of Texas at Tyler, Andrew was a founder of the first chapter of Kappa Sigma Fraternity at the university, serving as Treasurer and Vice President. As a founder, he had to secure donations from distinguished alumni for the start up costs, and complete the necessary steps for national certification of the chapter.

On the personal side, Andrew spends time with his wife, daughter and bird dog, and where time allows, plays tennis, golf, pickle ball and enjoys backyard construction projects.

In addition to his work with Prizm Development, Inc., Andrew is part owner and serves on the board of directors of MedIngenuity, LLC, a company involved with medical practice development for a variety of healthcare companies, medical practices and ambulatory surgery centers outside the niche of spine, orthopedics and neuro. 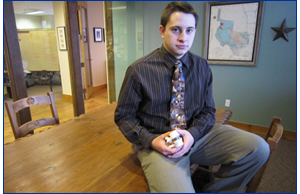 Mark Reznik joined Prizm Development in 2009 with a Degree in Business Administration with a major in marketing from University of North Texas. He also attended Oklahoma State University for his first two years of college.

On the health side, Mark has completed a Marathon (26.2 miles), two Ultra-Marathons (31 miles) and a Marine Corp Mudrun (6.2 miles through mud and obstacles with boots and fatigues). He played high school tennis and now plays golf and works out for recreation. 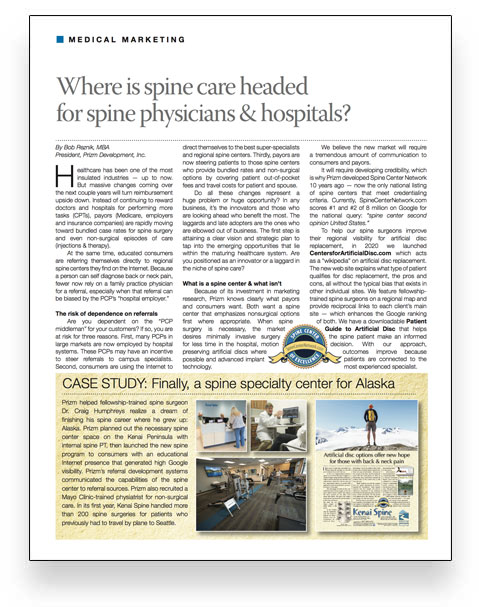 The pictures displayed in this website are images of physicians, patients and employees who have consented to have their pictures in this website. If you are viewing in Internet Explorer 8 or older you may need to update your browser.

Wouldn’t it be convenient if someone created a listing of spine centers of excellence across the United States that all emphasize non-surgical treatment options before surgery?

Finally, there is a place.